Knights of the Maccabees 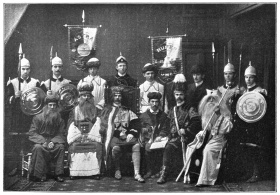 The knights took their name from the Maccabees (Maccabeans), the Jewish tribe that led the Maccabean Revolt against the Seleucid Empire, and used the legend of its leader, Judas Maccabeus (Judah Maccabee), as inspiration in the creation of their secret rites and degrees; however, the ritual work and degree system was considered of secondary importance to their member insurance program.

See our page on K.O.T.M. Tents for index of local Tents

The Maccabees were organised into Tents, each presided over by a Commander and their officers — Lieutenant Commander, Knight Record Keeper, Master at Arms, Sergeant, Chaplain, Guards, Sentinel, and Picket — who, in turn, were under the jurisdiction of a regional Great Camp, and the Supreme Tent as the overall executives.