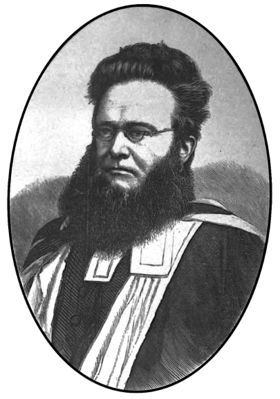 Kenealyism is a school of religious thought drawing on the writings of Edward Vaughan Kenealy (1819-1880), an Irish barrister and politician, who was declared to be the Twelfth Messenger of God by his follower(s), joining a lineage of prophets beginning with Adam (Oannes), continuing through Enoch, Fo-Hi, Brigoo (Bhrigu), Zaratusht (Zoroaster), Thoth, Amosis (Moses), Lao-Tseu (Laozi), Jesus, Mohammed (Muhammad), and Genghis Khan (of whom Kenealy was supposed to be the re-incarnation). During his own lifetime, Kenealy wrote a series of texts, including The Book of God, a three volume work on the apocalypse of Adam-Oannes, and two further books on the second and third messengers, Enoch and Fo, all credited to the symbol of the Circumpunct (⊙) rather than under his name; while the ideas proposed by Kenealy were, after his death, kept in print and expanded on by Charles Wells Hillyear (1849-1930).