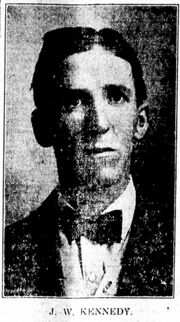 "IS THE MANDAN INVENTOR OF PERPETUAL MOTION A WIZARD?" (Bismarck Daily Tribune, 11 Sept. 1913)

James W. Kennedy (b. c. 1880) was an American machinist who, while resident at Mandan, North Dakota in 1913, was reported to have claimed success in the design and construction of a perpetual motion machine, overcoming "gravitation and resistance by a new principle he discovered in mechanics." The Kennedy machine was described as a wheel some 6 ft. (1.83 m.) in diameter with nine spokes, each of these spokes being fitted with a weight that falls to the outer end of the spoke as the wheel turns, moving such that five weights are falling downward at all times.