Harry Edward Perrigo (October 4, 1881 - March 15, 1941) was an American electrical engineer and inventor of a device he claimed accumulated and transformed "ether electric energy" from the atmosphere. Similarly to Garabed Giragossian and his "Garabed", Perrigo and his eponymous device were the subject of U.S. Congressional interest beginning in late 1917, though neither were successful in proving their claims or earning government funding for their work. 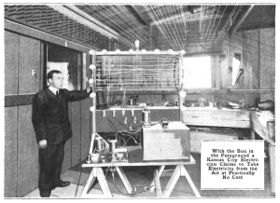 Perrigo with his device, caption reading "With the Box in the Foreground a Kansas City Electrician Claims to Take Electricity from the Air at Practically No Cost" (1916)