Harry Burness Dean was a Manx-born inventor who claimed in 1901 to have discovered what he called force momentum, a process he claimed would produce perpetual motion via a self-winding clock-like mechanism. 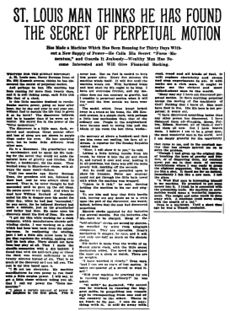 WRITTEN FOR THE SUNDAY REPUBLIC.

A St. Louis man, Harry Burness Dean of No. 3701 Kossuth avenue, thinks he has discovered the secret of perpetual motion.

And perhaps he has. His machine has been running for more than twenty days, and it is still ticking away, each little tick like that of a clock.

Is this little machine destined to revolutionize motive power, going on hour after hour, day by day and year in and year out, without fuel to sustain the life that is given it at its birth? The discoverer believes, and he is happier than if he were an inventor. His secret lies in the power of the "force momentum."

The discoverer is a little man, dark, reserved and cautious. Great mental effort and loss of sleep are not shown in purple rings under his eyes. He has sparkling eyes, but he looks little different from other men.

His is a Manxman. His grandfather was a watchmaker, and he spent his life looking for the secret that would set aside the natural laws of gravity and friction. His father, a bookkeeper, did the same. They worked away in Manchester shops, with always the same result — failure.

Until two months ago, Harry Burness Dean, the grandson and son, followed in their lead. And he was always about to succeed. That is, he never thought he had succeeded until he gave up the old ideas. He swore never to try again. And when he read how William Herford of Brooklyn ended his life in despair over his model the other day, when he had just "succeeded," he was sorry for he believed Herford had made a mistake, just as his grandfather and father had done. He came upon his discovery about the first of June. He says:

"I got my idea while working for a clock company, which manufactures electric self-winding clocks. I was working on a clock which had been sent back from the adjusting-room. In readjusting the winding part I left a little side screw loose in the pin that regulates the winding, making over half an inch play. There should not have been any play at all. Then I made the electric connection with a dry battery. I found that with the half-inch play or travel the clock was wound sufficiently to run twenty minutes instead of six. That is as much of the discovery as I can tell you. The rest is my idea based upon it.

"I do not use electricity. My machine manufactures its own power to run itself with a little surplus power. I will say, to get a little closer without telling you all, that I call my power the 'force momentum.'

"I place a certain amount of power in the machine in the first place. This is never lost. But no fuel is needed to keep this power alive. Every five minutes the machine winds itself. It will live until the machine wears out. With hardened brass and best steel its life ought to be long. I have not overcome friction, and my machine does not run contrary to gravity, but I consider it perpetual motion when it will run until the best metals we have wear out."

The model, which Dean keeps locked away in a trunk in his home, No. 3701 Kossuth avenue, is a simple clock, with perhaps a little less mechanism than that of an ordinary one. People in the neighborhood have become used to seeing him pull the blinds of his room the last three weeks — the mercury at above a hundred — and then see him come out smiling, his face all adream. A report for The Sunday Republic visited him.

Lifting a little ticking bundle from his trunk, he threw it into the air and shook it, and turned it over and over, holding it in all positions, but there was still the same steady tick, marking off the seconds.

But he could not be prevailed upon to show his treasure. Force nor strategy could not get through the little bath towel with which the machine was wrapped.

"Listen to it tick," he said, dancing, holding the machine to his ear and singing.

To see him and hear that little bundle tick, leaving out any doubt as to a trick upon the part of the discoverer, one would, indeed, believe that the man had discovered something.

Electric clocks operated by dry batteries run several months. But the batteries — the life — have to be charged. Many of the "self-winding" clocks are wound by electricity supplied by wires from telegraph companies. They are expensive. Dean's mechanism is simpler, he says, and it will cost only one-half as much as the electric clocks.

His model is made from the works of an 88-cent alarm clock, with the little secret mechanism added. The speed is regulated the same as a clock or watch. There are no weights.

"I have watched it closely," Dean says, "and I can see no trace of lost motion. It takes one-quarter of a second to wind itself."

"Will your machine be practical for use in running heavy machinery?" he was asked.

"It will," he declared. "My secret can be worked in running the biggest mills, in propelling sea vessels and in transporting from one end of the country to the other. There is no limit to its use. I can do anything with it. It will do away with coal, wood and all kinds of fuel. It will replace electricity and steam and stop experiments in air. It will make me a rich man. It ought to make me the richest and most talked-about man in the world.

"Many may say I have not discovered perpetual motion. Is there anything perpetual except the moving machinery of God? Nothing that I know of. Man must have food to live. His life here is not perpetual; it wears out.

"I have discovered something better than any other person has discovered. I have distanced them all — Franklin, Morse, Fulton, Edison, Marconi, all of them — I can't call them all now. But I have beaten them. I believe I am to be a great man, the most wonderful man in the world. And I am deeply grateful for the opportunity that came to me, and to the constant motive that has always spurred me on to solve the problem.

"Though I had given up the original idea of breaking the laws of gravity and friction, or of disproving them, my constant quest put me in the state of nervous watchfulness where I was ready to grasp the slightest suggestion. The idea came to me like a shot. It dazed me for an instant. Immediately I felt like a new man. I left the place.

"A West End man is interesting himself in my machine. He promised to put some money into it. I think he is connected with the automobile trade. My machine on automobiles would mean a wonderful improvement. The weight and noise be would done away with. A stanhope could move along with the stealth of a cat."

Dean is a machinist. Until a short time ago he was a Transit conductor.