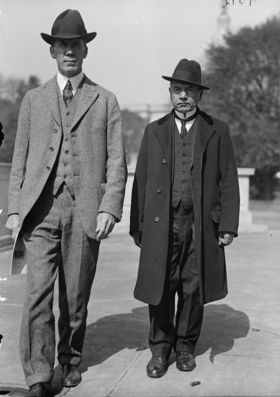 Garabed T. K. Giragossian (January 6, 1860 - August 15, 1944) was an Armenian-American inventor who came to some infamy beginning in 1917 over his attempts to receive recognition and protection from the U.S. Government for his Garabed fly-wheel generator, which he claimed was, in effect, a free energy device. The Congress went as far as to pass "Public Resolution 21" ("House Joint Resolution 174") in 1918, making promises for Giragossian's surety and remuneration if he were able to "demonstrate the practicability of his discovery or invention" to a commission of scientists that Giragossian would appoint, with the final approval of the Secretary of the Interior,[P] an act which was signed into law by President Woodrow Wilson;[3] however, the committee ultimately found the principles of the device were not practical and would not produce the "free energy" promised.[4][5] In spite of this setback, Giragossian was undissuaded and continued to petition the government on the issue, continuing until the end of his life to write letters and seek support for his invention.