The Enlightenment Caucus of the Crypto-Hominid Research Council has proposed several routes toward knowledge of the Yeti, many that would be considered heretical by common cryptozoologists and their skeptical friends.

Some have theorized a possible cross-cultural dissemination of the Yeti to areas as far as ancient Alexandria in North Africa due to figures such as Yeti Trismegistus appearing in some apocryphal wisdom texts produced during the 3rd century CE. Renaissance depictions of this figure bear a striking similarity to images of Hermes Trismegistus, leading some scholars to believe that the familiar image of Hermes is actually an anthropomorphic development of Yeti Trismegistus. Orthodox persecution of the Cryptid oriented wisdom schools during the early development of the Catholic empire forced many groups underground. It seems likely that many of the figures we have come to understand in more anthropomorphic forms were originally represented as Cryptids.

In 1899 Laurence Waddell records his ignorance in the work, Among the Himalayas, where he challenges his wise Nepalese guide's insinuations that a series of footprints discovered in the snow during one of their expeditions were created by the majestic man-creature popularly known as the Yeti. Waddell supposed the footprints to have been made by a bear, excusing his shortsighted inferences through the fact that all of the Yeti tales he heard consisted of hearsay and rumor.

In 1945 the U.S. tested it's new nuclear arsenal on Hiroshima and Nagasaki. Five years later the cold war was in full swing and Rock & Roll was stepping into it's formidable youth.

The 1950's were a very fertile time for Yeti sightings, with Sir Edmund Hillary, John Angelo Jackson, and Professor Frederic Wood Jones contributing to the increasing popular mystique of this potent Tibetan crypto-hominid. Such vigorous media massaging climaxed with CIA asset, Tom Slick, a notorious Texas oil heir, running reconnaissance for the escaping Lamas during the Chinese occupation under the auspices of Yeti investigation.

In 1959 famed actor Jimmy Stewart also played a part in the strange post-nuclear Yeti saga by smuggling a finger section from the legendary Pangboche Hand, a sacred Yeti relic once held at the Buddhist monastery in Pangboche, Nepal, to a rouge primatologist in the U.K. Receiving the stolen length in India from Peter Byrne, a member of Tom Slick's entourage, Jimmy slipped the finger into his wife's delicates, concealing the item from customs in her underwear while traveling to the British Isles.

Presenting the piece to London University primatologist William Charles Osman Hill, the unquestionable expertise of science eventually determined that it's origin was something more human than human.

Since then the entire Pamboche Hand has been lost and no further tests have been performed. This has not stopped the continued focus on finding physical proof for the existence of the Yeti.

Footprints are one of the most prominent examples of evidence for the existence of Yeti.

Although many have been lead to see these markers in light of cryptozoological explanations, other scholars have remarked on the surprising similarity of Yeti footprints to the Buddhist traditions which detail the "lotus feet" of the Enlightened one. 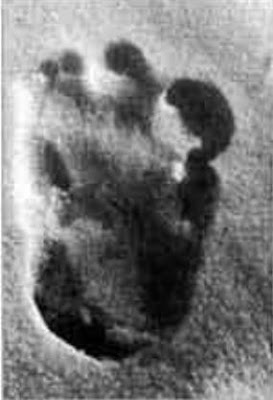 Like many cryptids, references to the Yeti in popular culture abound. One curious and largely unknown example is the NES adventure game Yeti Master, along with what is likely its sequel, Ice Caverns of the Crystal Yeti.

Additionally, as seen on "Kyle and Dakota's Believe It Or Don't!," the following gems of lost pop culture: