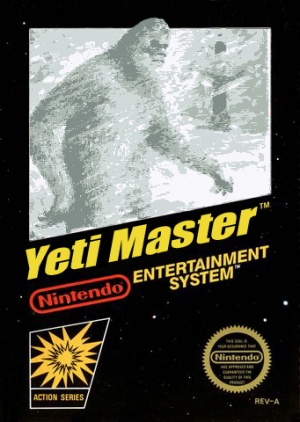 Yeti Master was an ostensibly commercial action adventure game for the Nintendo Entertainment System. Several copies are known to be held by a handful of collectors around the world, but only one cartridge bears the Official Nintendo Seal and experts generally agree that the seal is a forgery. The origins of the game, from its creators to manufacturing to distribution, remain almost entirely a mystery. Some have speculated that the game was an aborted attempt to cash in on a slight resurgence in popularity for the TV show The Man From Y.E.T.I., which was in extremely limited syndication in the late 1980's. However, there aren't many similarities between the game and the TV show, aside from an underground base. For example, the game entirely lacked the Y.E.T.I.'s characteristic hallucinatory Alligator Men.

The game itself was an almost exact clone of the original Metroid, with no explanation or directions, and appears not to have had an instruction manual. As a result it is remembered, by those who claim to have played it, as being difficult nearly to the point of inducing madness. Aside from the title screen, the game contained no text whatsoever save for a series of untranslatable glyphs that appear when the player encounters one of the five Yeti scattered throughout the world. Since no description of new items was given, they could only be deciphered through using them, and many had only limited amounts of ammunition. What's more, the game entirely lacked a password system. The game is remembered, if at all, as an oddity of the era, and as being the ancestor of the more positively-received SNES adventure game Ice Caverns of the Crystal Yeti

NOTE: The following gallery of screenshots are of uncertain authenticity, and should not be taken as definitive proof that they represent the game. They are presented here as a matter of interest to investigators.