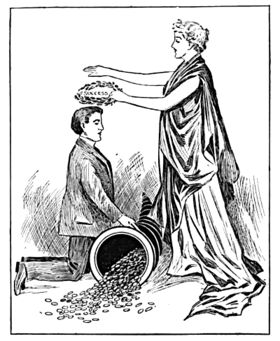 Goddess of Fortune Bestowing a Ki-Magi Wreath of Success and a Cornucopia of $20 Gold Pieces on the 'Willing Mind.'

The Columbia Scientific Academy was a mail-order concern that offered courses and degrees in the studies of personal magnetism, palmistry, hypnosis, and occult science, which together formed the basis of their proprietary "Ki Magi" system. The academy was incorporated at New York in late 1900 and operated from offices in New York for some four years before being banned from the U.S. postal system on the basis of fraud, the corporation then ultimately being dissolved three years later.

Despite the collapse of the academy, the men behind it went on to attain great wealth and success in the years that followed: E. Virgil Neal, the operational manager of the outfit, made a fortune in cosmetics as the proprietor of To-Kalon Mfg. Co.; and R. F. Robertson, the president, became a successful stock trader and broker as an associate of Charles Stoneham.

GIVE HIS SECRET TO THE WORLD.