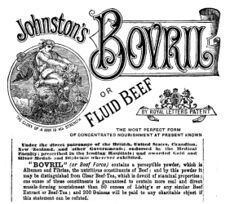 Advertisement for "Johnston's Bovril or Fluid Beef" from 1888.

Bovril (from Latin: bovinus, "ox", + -vril, from Edward Bulwer-Lytton's The Coming Race, translated as "Beef Force")[i] is a trademarked name applied to an extract of beef product that was originally manufactured and sold by John Lawson Johnston during the Franco-Prussian War, first known as Johnston's Fluid Beef and later Fluid Beef Brand Bovril. The beef extract was to be diluted in hot water to produce a beef stock, also referred to as beef tea, though it was also promoted as a spread.

The trademark was also formerly used in the naming of products the likes of Invalid Bovril (a "more concentrated, less seasoned" formula for the ailing), Bovril Lozenges (a tablet pill sold as "the New Form of Concentrated Nourishment"), Bovril Stamnoids (another tablet pill), Bovril Peptone of Beef, Bovril Beef Jelly, Bovril Chocolate, Bovril Celery Salt, Bovril Wine, Bovril Cartridges, and Bovril Emergency Food. Unilever is the present day owner of the Bovril trademark, which is applied principally to a combination beef and yeast extract product, described as "a high protein beef paste", that differs from the original formulation, and, from 2004 to 2006, excluded any beef content whatsoever, being entirely vegetarian.