Bohun (or bohon) upas (from the Malay: pohon upas, "poison tree") is an appellation for a cryptobotanical tree described as being native to the island of Java in the Dutch East Indies, now Indonesia, which, according to a fantastical story attributed to N. P. Foersch, produced toxic vapours that made the surrounding environment uninhabitable for miles in any direction but was highly sought after in the 1770s as the source of a highly poisonous gum that was harvested by condemned prisoners for the local Javanese Emperor, Susuhunan Pakubuwono III. While Foersch's story was generally discredited, it was taken up as a popular literary instrument, appearing in the poems of Erasmus Darwin, Robert Southey, Lord Byron, and others.

The term upas is a Javanese-Malay term meaning "poison," and refers to arrow and dart poison harvested from the antiaris tree (antiaris toxicaria), which is widely distributed across Southeast Asia, Oceania, and Australia, and does not produce the toxic effects on the surrounding environment that is attributed to the legendary bohun upas.

Natural History of the Poison-Tree in Java (London Magazine, Dec. 1783) 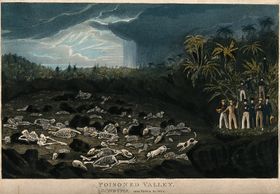 Burnett observes a correspondence of Foersch's claim regarding the barren lands surrounding the Bohon Upas tree, and a later account by Alexander Loudon of an Upas Valley, or Guevo Upas, the Poison Valley, which appeared as "Extract of a Letter from Mr. Alexander Loudon to W. T. Money, Esq." in the Journal of the Royal Geographical Society of London (v. 2, 1832), drawing a conclusion that:

"The origin of Foërsch's centaurian tale must now be evident: that Upas meant poison, and was an adjective term applied to deleterious things of various kinds, whether trees or places, he knew not; he had heard of the Upas, had probably witnessed its effects as a poison, and not improbably had seen the real Bohun Upas tree, which perhaps may sometimes grow in a barren district, such as he has described. He had heard of the Valley of Death, the Upas valley, and be might even have ridden round some sterile spot for thirty miles, fearing to tread upon its precincts, lest he should approach too closely to the chimera he had formed, by combining the accounts of the Upas valley and the Upas tree. As to the old priest, he might have heard from him the legend he relates; but for the numerous other facts used as embellishments to the tale, he must have been solely indebted for them to a fertile imagination."

Our life is a false nature -- 'tis not in
The harmony of things, -- this hard decree,
This uneradicable taint of sin,
This boundless upas, this all-blasting tree,
Whose root is earth, whose leaves and branches be
The skies which rain their plagues on men like dew --
Disease, death, bondage -- all the woes we see --
And worse, the woes we see not -- which throb through
The immedicable soul, with heart-aches ever new.
Retrieved from "https://hatch.kookscience.com/w/index.php?title=Bohun_Upas,_the_Poison_Tree_of_Java&oldid=18152"
Categories: