Bitcoin is a digital scrip that exists in the form of cryptographically-signed transactions on a peer-to-peer distributed public ledger called the Blockchain. The protocols for Bitcoin were originally released in 2009 by an unknown person or group under the name Satoshi Nakamoto, as a white-paper entitled Bitcoin: A Peer-to-Peer Electronic Cash System, and as an open-source software implementation of the protocol described in the white-paper known as the Bitcoin Core. It has been suggested that the Bitcoin protocol was developed by: unknown alien intelligence as a "[substitute] for gold in the digital world";[E] an artificial intelligence effort to organically generate a peer-to-peer network of unparalleled computing power for its own self-deployment;[A] or, more prosaically, the U.S. National Security Agency as precursor to a one world currency program.[N] 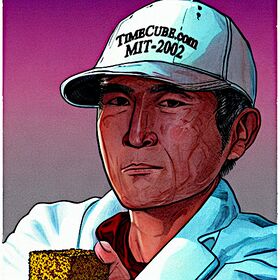