The Arctic Brotherhood was an American-Canadian fraternal organisation, initially formed on 26 February 1899 as an entertainment troupe by Capt. William A. Connell and passengers of the steamship "City of Seattle," destined for Skagway, Alaska (and, ultimately, the gold fields of the Yukon Klondike), and later re-grouped as a structured order with initiation rituals in the manner of such other societies of that time. 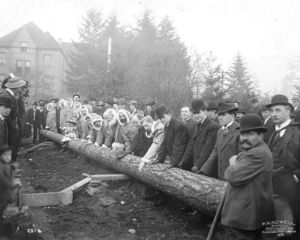