Alexander James McIvor-Tyndall (April 3, 1871 - December 10, 1940) was an English psychical demonstrator and touring lecturer on many allied subjects, including palmistry and hypnotism. Contemporary press accounts related stories of McIvor-Tyndall's experiencing cataleptic fits, some lasting for days, following his public demonstrations of mind reading, a point which he himself played up, and he received further coverage for his performance of such feats as blind driving carriages and proposals to be buried alive. McIvor-Tyndall drummed up further attention by making a habit of offering of his services as a hypnotist to defendants in criminal cases, promising to draw evidence from their unconscious to prove their innocence or guilt, while also offering his services as a clairvoyant to law enforcement, boasting of his power to lead them to criminals. In his regular stage performances, McIvor-Tyndall was known for going blind-folded in an effort to prove his powers as a psychic and for hypnotising groups of people, his routine being roughly in line with other mentalist acts of the day.

As a speaker, writer, and publisher, McIvor-Tyndall was associated with New Thought and Spiritualism, and seemingly every other discipline of like character in between, and his memberships were likewise extensive, including the International Psychic Alliance, New Thought Fellowship, National Spiritualist Association and General Assembly of Spiritualists, Psychic Research Bureau, &c.

McIvor-Tyndall was also editor of The Swastika: A Magazine of Triumph (1906-1911), the main organ of a Swastika movement he promoted for a period. 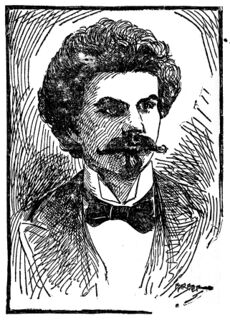 Illustration of McIvor-Tyndall from 1895 advertising for a Los Angeles performance. 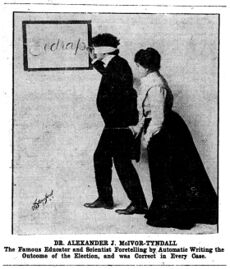 Photograph of McIvor-Tyndall, blind-folded, and an assistant, engaged in the act of automatic writing, c. 1909.