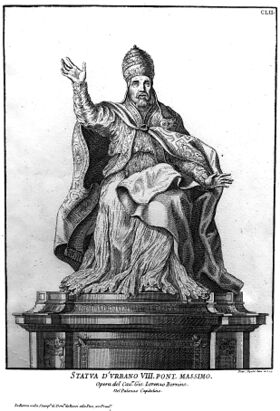 Engraving by Francesco Aquila after the Capitoline Statue of Pope Urban VIII by Gian Lorenzo Bernini.

Urban VIII (Latin: Urbanus VIII; bap. April 5, 1568 - July 29, 1644), born Maffeo Barberini, was a Florentine noble who served as the Bishop of Rome, the leader of the Catholic Church and ruler of the Papal States, from his election in 1623 until his death. Barberini was the heir to his uncle, Cardinal Francesco Barberini, and quickly rose through the ranks of the Catholic clergy in the early seventeenth century, first receiving a commission by Pope Clement VIII as a papal legate to the court of King Henry IV of France, followed by instalment as the Archbishop of Nazareth, and, under Pope Paul V, made a cardinal in his own right at the Church of San Pietro in Montorio and a papal legate of Bologna, among other roles and titles of ecclesiastical authority.

As Pope, Urban VIII issued the papal bull Sanctissimus Dominus Noster (1625), which served as an injunction against the spread of private revelation and folk saints outside the sanction of the Church, laying the ground for later developments in formal beatification and the canonisation of saints by the Church.