Thomas Lynn Bradford (c. 1868-9 - February 5, 1921), also known as Professor Flynn, was an American lecturer and dramatic orator, mechanical draftsman, and Spiritualist who committed suicide in 1921, apparently as part of an experiment he conceived to prove the existence of the afterlife, which, according to Ruth Starkweather Doran, was accomplished, as she reported having psychically-received messages from his "spirit voice" in the weeks that followed Bradford's death.

"— and it is through scientific facts that I propose to demonstrate clearly the phenomenon of the spirits, and prove that all the phenomena are outside the domain of the supernatural."

Thomas Lynn Bradford, message found in typewriter after his death

Messages from the Spirit World 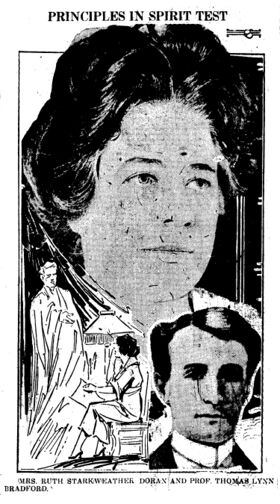