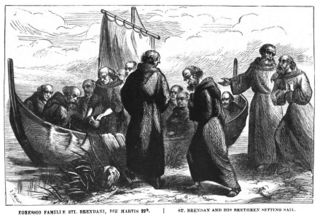 St. Brendan's Island (Spanish: La Isla de San Brandán or Borondón), also known as the Promised Land of the Saints (from Latin: Terra Repromissionis Sanctorum), is a legendary phantom island, reputedly first discovered in 512 by St. Brendan the Navigator and his party of evangelical monks. It was reputed by later believers to be situated some distance west of the Canary Islands, the Spanish archipelago near the southern coast of Morocco, while others record it as being nearer to the Azores (Açores), the Portuguese island chain.