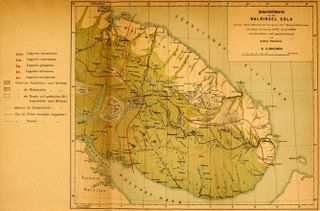 Map of the Kola Peninsula, designed by Alfred Petrelius, "after the observations of the expedition in the years 1887 and 1889."

The Kola Peninsula Expedition (1921-23) was a Soviet scientific exploration mission undertaken to seek out remnants of a Hyperborean civilization among the Sami tribes. It was led by Aleksandr Barchenko, on behalf of the All-Union Institute of Experimental Medicine of the OGPU, partially on the basis that Hyperborea was possessed of advanced technological and occult powers that could be exploited to the benefit of the Communist Party apparat.

In his reports on the expedition, Barchenko claimed to have found extensive evidence of Hyperborean ruins in the region, including pyramids and a vast hole in the earth.