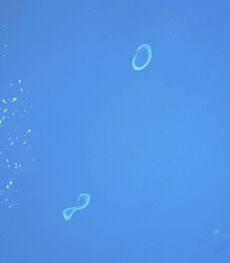 The Minerva Reefs, as seen from aboard the International Space Station on 26 Jan. 2002

The Republic of Minerva was a self-declared state, officially proclaimed on 19 January 1972 by a group including Michael Oliver, a real estate investor, and other members of the Ocean Life Research Foundation, that claimed sovereignty over the Minerva Reefs (also known as Teleki Tokelau and Teleki Tonga), a pair of submerged atolls in the south Pacific Ocean, situated some 300 mi. (480 km.) south-west of the Tongan capital Nuku'alofa. Six months after declaring itself independent, Minerva's physical territory was occupied by Tongan expeditionary forces: the North Minerva Reef on 19 June 1972, and the South Minerva Reef on 21 June 1972; the Kingdom of Tonga's claims to the atolls were upheld by the South Pacific Forum three months later.

After the failure of Minerva, Oliver, under the auspices of the Phoenix Foundation, threw his support behind the Abaco Independence Movement, a political group that sought the secession of the Abaco islands (as the Abaco Commonwealth) from the independent Bahamas in the 1970s. The provisional president-in-exile, Morris C. Davis, meanwhile continued in his efforts to promote Minerva as a legitimate state, though these came to little. In October 2003, a self-declared successor state, the Principality of Minerva, launched a website and published their own claims to the atolls, but this most recent effort drew only limited attention, the site ceasing to exist just a few years later.