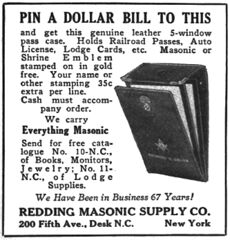 Redding Masonic Supply Co. was a New York-based publisher and purveyor of Masonic paraphernalia, first established as Redding & Co. by M. Wolcott Redding and Leonard Wightman in 1859. After Redding's death in 1892, ownership of the concern was passed to Redding's wife, Angie Chapman Redding, who later married Charles Cozzens; a daughter of the Cozzens', Evangeline Cozzens, eventually inherited the business and served as its president until her retirement in 1952. The company continued to operate at least into the 1970s, when it was located at 175 Fifth Avenue, New York.