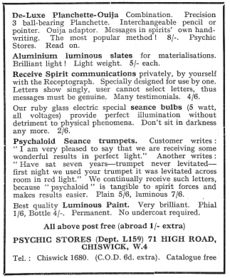 The Psychaloid Seance Trumpet is a spirit trumpet that was formerly offered for sale by Psychic Stores of Chiswick in London, England, the device being represented by the manufacturers as having been made of a substance as psychaloid, a form of celluloid, and advertised as being "tangible to spirit forces,"[1] described as "easiest material which spirits may handle, or rap upon," and as "the ideal material for construction of Seance Trumpets."[2]