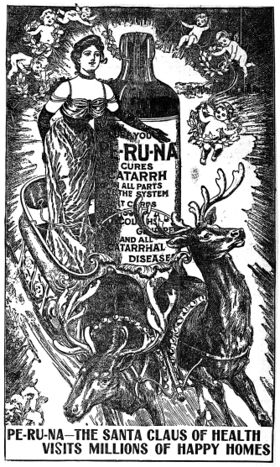 A 1904 Christmas advertisement for Pe-Ru-Na, "The Santa Claus of Health Visits Millions of Happy Homes."

Pe-Ru-Na was a patent medicine promoted by Samuel Hartman and his Peruna Company as a curative for "catarrhal" diseases (i.e. inflammation of mucus membranes in the sinuses, nose, throat), which may be read as being inclusive of anything from the common cold to influenza, or, per the Peruna line, a half of all human diseases.

Samuel Hopkins Adams reported in 1905 that Peruna could be made for home consumption by "mixing half a pint of cologne spirits, 190 proof, with a pint and a half of water, adding thereto a little cubebs for flavor and a little burned sugar for color;"[A] based on the formula of half a pint of 190 proof spirit, or 10 fl. oz. (285 ml.) at 95% alcohol by volume, combined with 30 fl. oz. (855 ml.) of water, one would expect to find Pe-Ru-Na had an alcohol content of around 23.8%, diluted only somewhat by the further addition of cubeb (piper cubeba, Java pepper) and burnt sugar (black jack, sugar caramelised at high temperature). The primary non-alcoholic ingredient, cubeb, was advertised in other products as alleviating such ailments as allergic rhinitis (hay fever), asthma, chronic pharyngitis (sore throat), and the like, and was even included as an additive in tobacco cigarettes promoted as possessing such healing powers.