Dae Health Laboratories (also referred to in early advertising as Public Health Laboratories) was a distributor of proprietary medicine, in particular what they called Nuxated Iron, a thrice-daily supplement containing calcium glycerophosphate, nux vomica, and peptonate of iron. The company was active from 1915 into the 1940s, being originally incorporated at Detroit, Michigan in September 1915[1] with operations in New York, and later foreign branches opened at Windsor, Ontario (Canada), Paris (France), and London (U.K.).

The corporation was owned and operated through International Consolidated Chemical Co. of New York, another E. Virgil Neal concern, during the early 1920s. The parent company was dissolved by the mid-1920s, and several subsidiary companies, including Dae Health Laboratories, continued to operate independently thenceforth. 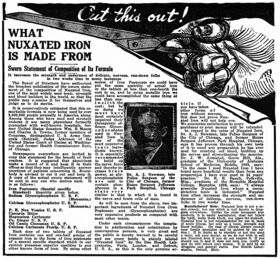 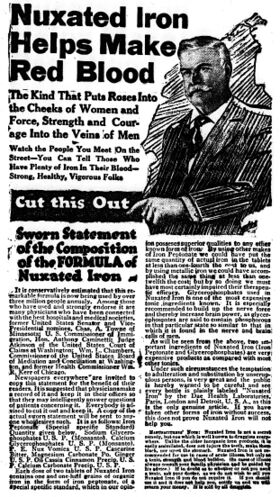 1919 advert. with "Sworn Statement of the Composition of the FORMULA of Nuxated Iron."