(Redirected from Noel of Etraa) 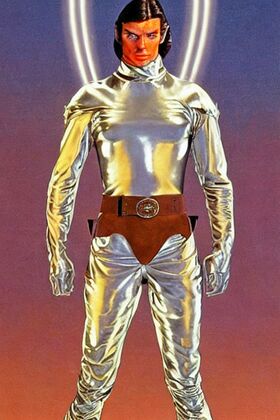 A typical Etraan man (according to Stable Diffusion AI).

Etraa (Ejii) is an alleged planetary body, described as being "somewhere out beyond Jupiter," which is the home of extraterrestrial beings with whom Elgar Brom claimed to be in contact. According to Brom's account, the Etraans, population six billion, are "three hundred years ahead" of us technologically, citing particularly the development of atmospheric regulation and weather control, and mastery of perpetual motion physics to produce unlimited free energy.[1] Also of note: Etraans are a culture very much engaged in the promotion of fitness and body building.

In their "true form", the Etraans are described as "very tall, handsome, well-built with cinnamon skin, light blue eyes, tawny brown hair with smears of silver in it," generally possessed of a youthful outward appearance. "They wore a skin-tight material with a wide, girdle-like belt having a large 'buckle' in front with an insignia on it."[2]