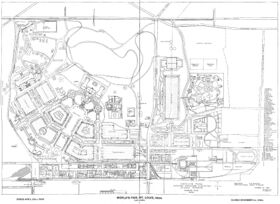 The Louisiana Purchase Exposition, or St. Louis World's Fair of 1904, was a World's Fair held at Forest Park and Washington University in St. Louis, Missouri from 30 April through 1 December 1904, the event based around celebrations of the 100th anniversary of the transfer of the Louisiana Territory from the First French Republic to the United States of America. It featured pavilions sponsored by 43 of the 45 American states and 50 other countries.