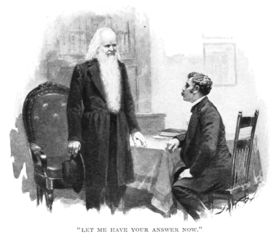 Johannes Llewellyn Llonggollyn Drury is a character and narrator in Etidorhpa, or the End of Earth (1895), described as being the writer and editor of an account of the repeated visitations by I-Am-The-Man to Drury's home, dated as beginning in November of an unspecified year in the 1850s, during which the Man reads from his manuscript that forms the main story of the novel (his journey to the underworld), broken up by interactions, often as question-and-answer sessions, between Drury and the Man.

In the first chapter, Drury relates that he is named for his maternal grandfather, a Dr. Evan Llewellyn, "scientist and speculative philosopher, well known to curious students as the author of various rare works on occult subjects," and that he went by Lew Drury in his youth before ultimately adopting a three name alias, formed of certain re-arranged letters of his birth name, in his public life (and, thus, he could not be found in the Cincinnati Directory as Drury). He adds, further, that he was a Welsh descendant of early settlers of New York City, and directly descended from kings of Wales.