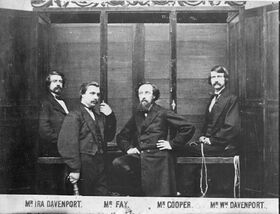 The Davenport Brothers were Spiritualist mediums and touring psychical demonstrators active from the 1850s through 1870s, their act comprised of two brothers, the elder Ira Erastus Davenport (1839-1911) and the younger William Henry Davenport (1841-1877), who were initially managed by their father, Ira Davenport, Sr., and assisted by William Marion Fay, all hailing from Buffalo, New York. A rotating crew of confederates and assistants included the likes of Harry Kellar and Alexander Herrmann (Hermann the Great).

The duo were best known for their spirit cabinet effects, in which musical instruments would sound as if handled by ghosts. These were exposed repeatedly by John Nevil Maskelyne and other rival acts; in spite of this, the brothers continued to successfully tour for years after the revelation of their methods.