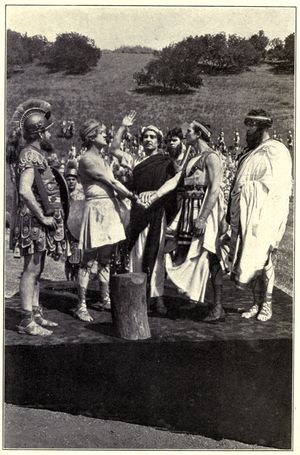 The legend of Damon and Pythias (Damonem and Phintiam) is an ancient Greek story about a test of Pythagorean morality and the bonds of friendship, as related in the writings of Aristoxenus of Tarentum, Marcus Tullius Cicero, Diodorus of Sicily, and others, and later adapted in the poetic and for the stage, most famously by Richard Edwardes, Friedrich Schiller, and John Banim, the latter's effort inspiring the ritual of the Knights of Pythias. The original telling casts Pythias as a man condemned to death by Dionysius of Syracuse, but who is freed to finalise his affairs on condition that his friend, Damon, be held in place, to be killed if Pythias does not return; when Pythias returns, as promised (and in spite of obstacles), Dionysius sets the pair free, impressed by their high moral character.