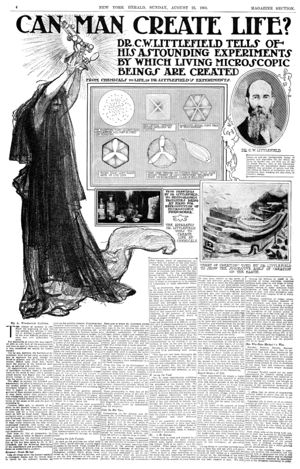 A. Frederick Collins article on Littlefield's archebiosis claims, published in the New York Herald of Aug. 23, 1903.

Charles Wentworth Littlefield (December 17, 1859 - February 2, 1945) was an American homeopathic physician, surgeon, and prononent of a theory of archebiosis from minerals.

By his own account, as published in the One Thousand American Men of Mark Today (1916), Littlefield was a self-taught practitioner, "admitted to practice by the State Board of Examination in Arkansas in 1886. In 1896 he received the degree of M.D. from the Kansas City Homeopathic Medical College, valedictorian of class. He has practiced medicine under the State Board of Examiners in Arkansas in 1886-90; in Kansas in 1890-97; in 1897-1909 at Indiana; and since 1909 at Washington. He is a member of the Indiana Institute of Homeopathy, Washington State Society of Homeopathy, King County Homeopathic Medical Society, and the American Institute of Homeopathy."[1] After relocating from Indiana in 1909, records suggest that Littlefield remained in King County, Washington for the remainder of his life.

"I can bring the dead back to life."

"Ammonia, alcohol, and distilled water added to a quantity of salt..."

A selection of newspaper reports on Littlefield's claims to have created life in his laboratory:

A more critical survey of the claims:

An instrument for the healing of the body and mind by use of light.

The Rainbow Lamp, patented on 27 August 1918 as "Therapeutic Light Apparatus" (US Patent No.: 1277089), is described as "an apparatus which may be employed to decompose light into its elementary colors and then to concentrate or collect a large number of similar rays upont he same area in such a manner that the rays of the same color from all sources will be superposed upon the same area."

"First: to show by demonstration and illustration that thoughts are things, and their power may be expressed through certain mineral compounds, such as are known to be a part of organic nature, vegetable, animal, and human. Second: That our thoughts may be formulated into charms or mantras according to a mathematical system herein called: Personal Numerology, or mantras. Through the use of this system they become more potent to execute our desires." - Man, Minerals and Masters (1937)