Anna Eva Fay (March 31, 1851 - May 20, 1927) was an American psychical demonstrator and Spiritualist-Theosophical medium, active as a performer for over fifty years, beginning in the 1870s and continuing into the 1920s.

Fay began her touring career working as an assistant and later partner to H. Melville Fay, her first husband, and quickly became the feature act in the Fay-Braddon Combination,[ii] playing up her endorsement from William Crookes. From the late 1880s onward, Fay had become the sole headliner, an indefatigable and lucrative performer who seemed to continuously be on tour, filling venues across the North America, until her retirement, in spite of routine exposures of her methods by rival acts. 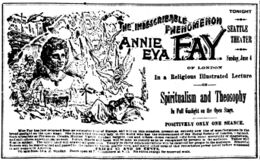 Seattle Post-Intelligencer advertisement for a performance on June 4, 1893 at the Seattle Theater. 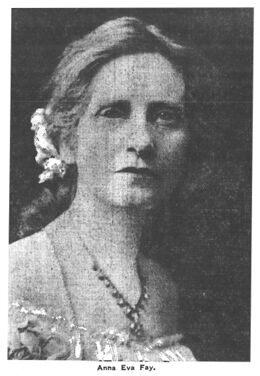 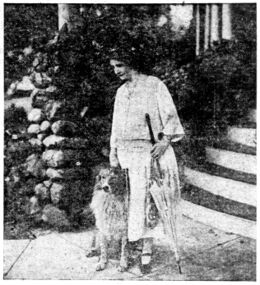